Julia thought she'd beaten polio 50 years ago. Now it's returned to haunt her... and it's a timebomb that could affect thousands more.

By CHLOE LAMBERT
PUBLISHED: 22:48 GMT, 8 July 2013 | UPDATED: 22:51 GMT, 8 July 2013
Follow us: @MailOnline on Twitter | DailyMail on Facebook
TV presenter Julia Roberts has an enviable, toned physique, but when you learn that as a child she was struck with polio, her fitness is even more impressive.


The infectious disease attacks the nervous system and can lead to paralysis, disability and even death.
At 14 months old, Julia spent 18 weeks in hospital and doctors predicted she would be disabled. But her parents refused to accept this. Incredibly, Julia became a dancer and fitness instructor before going into TV.

'I've never known if I was always destined to be a tough cookie and that's why I made a good recovery, or if having polio made me determined,' says Julia, 56, a QVC shopping channel presenter.
But she has discovered that the disease she thought she'd overcome more than 50 years ago has a devastating sting in its tail - she's one of the 80 per cent of patients who, years later, experience a return of the symptoms of muscle loss, cramps, weakness and fatigue known as post-polio syndrome.
Julia doesn't remember having polio, but knows she was close to death.
'In the summer of 1957 my mother noticed I'd stopped trying to pull myself up and walk and instead just wanted to sit,' says Julia, who lives with her partner Chris in Epsom, Surrey, and has two children, Daniel, 26, and Sophie, 25.
She was rushed to hospital and put into isolation. Her parents, six-year-old sister and three-year-old brother could only look at her through a window on visits.
'To find out how I was, my parents had to read our local paper where there were lists of patients categorised as critically ill, dangerously ill and seriously ill,' she says.
'I was on the critically ill list. A fortnight later my father saw my name was gone. For a terrible moment they thought I hadn't made it, until they saw I'd been moved to “dangerously ill”.'
After six weeks in isolation she was moved to a general ward. The polio affected Julia's left leg - the muscles had wasted so much it was shorter than the right.

'I was allowed home on Christmas Eve with my leg in a calliper. The doctors said I'd always have to wear it,' says Julia. 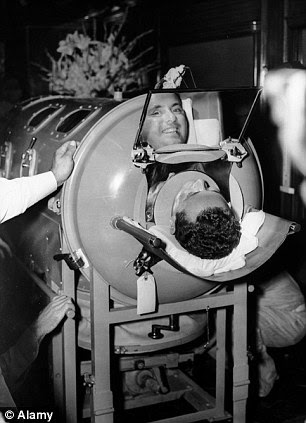 Progress: Before the invention of the iron lung, a machine that fills lungs with air by making the chest rise, children with polio died frequently
'But my parents heard about a hospital consultant teaching children who'd had polio to swim and dance, and signed me up. At home my mother spent hours each day doing physiotherapy to strengthen my leg muscles.'
Gradually, Julia's leg improved and she started walking without the calliper. By the age of 11, her left leg was strong enough for her not to need special shoes. She played tennis and netball, danced and swam.
Today, the only sign she has is a slight limp, and she doesn't wear high heels as she hasn't got enough control in her ankle to balance in them.
Up to 45,000 people were infected by the poliomyelitis virus during the British outbreak in the Fifties, many of them children.
In the majority of cases, the virus caused minor flu symptoms or 'abortive' polio - many had it without realising. However, 1 per cent of patients developed paralytic polio, says Professor Carolyn Young, a neurologist at the Walton Centre in Liverpool, which has a polio clinic.
'Here, the virus attacks the nervous system rather than just the throat, and the patient may become paralysed to such a degree they are unable to move or breathe.
'Before the invention of the iron lung [a machine that uses air pressure to make the chest rise, so the lungs can fill with air], these children would die.'
Thanks to a vaccine programme in the Sixties, polio has been eradicated, though it remains a problem in Nigeria, Afghanistan and Pakistan. But 80 per cent of survivors later experience post-polio syndrome, though doctors don't know why.
The symptoms - pain and weakness, fatigue and muscle loss - can strike any time from 15 to 50 years after the initial disease.
'It may not be that it comes back, but that the recovery of the nervous system against the virus starts to fail as you age,' says Professor Young. 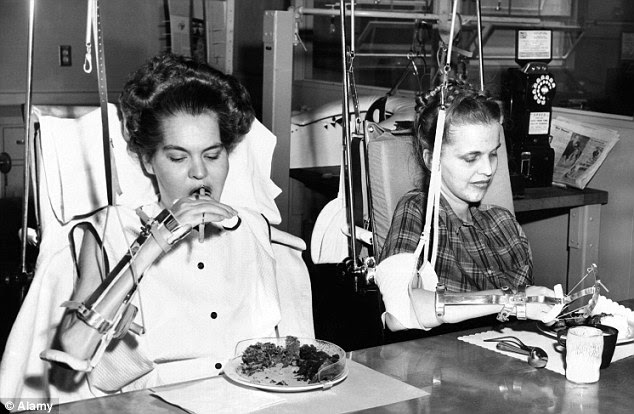 Double misfortune: Many who survive polio the first time, like these two women in rehabilitation, will later experience post-polio syndrome
He says: 'We're even seeing some people who had the mild abortive form of polio developing post-polio syndrome with muscle pain and weakness.
'However, GPs don't recognise post-polio syndrome as well as they could. It's not taught in medical school because polio has been consigned to the history books.
'As a result, people affected are being told it's old age, so they may not get the support they need.'
A survey by the British Polio Fellowship found 69 per cent of GPs rated their level of awareness of post-polio syndrome as low; 42  per cent said they would need to refer a suspected case to a neurologist for diagnosis.
Eighteen months ago, Julia was diagnosed with chronic myeloid leukaemia, which typically develops very slowly, and she is taking chemotherapy tablets.
'It's muddied the waters for me as I feel incredibly tired and don't know whether it's the leukaemia or post-polio syndrome,' she says.

Close up: The polio virus. Up to 120,000 people in Britain are thought to have the syndrome
'Sometimes everything feels like a real effort and it takes me much longer to recover from exercise, so I'm having physiotherapy.'
She wants to raise awareness of post-polio syndrome.
'If people know they've got it, they can manage their lives better. It's sad there's nothing that can be done about it, and it can be degenerative. We just don't know what that might mean for the future. I'm trying to take each day as it comes.
'In some respects, I feel lucky: I can still walk, do my job, think and write. I'm a positive person, and I've always had the mantra: “What doesn't kill us makes us stronger.” '
British Polio Fellowship: britishpolio.org.uk. Julia has written a book about her life, One Hundred Lengths Of The Pool, available through QVC or as an e-book.