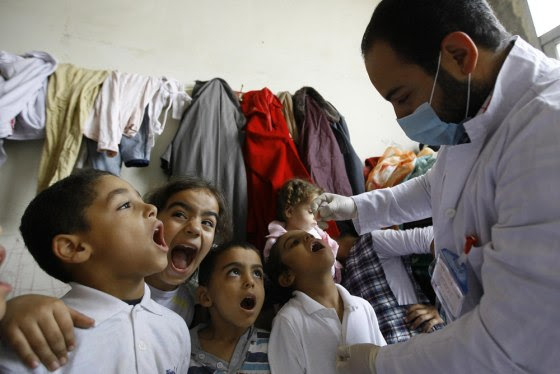 Mohammad Zaatari / AP
Displaced Syrian children line up to receive vaccination against polio at one of the Syrian refugee camps in the southern port city of Sidon, Lebanon, this week, following an outbreak of the crippling and highly communicable disease in neighboring Syria.
An outbreak of polio in eastern Syria that has paralyzed at least 10 children could spread to neighboring regions, including Europe — and in such a silent way that no one would know it for a year.
That’s a warning from two infectious disease experts in Germany, who say that large numbers of Syrian refugees now fleeing that conflict-torn country could settle in Europe, bringing the virus to places that have been polio-free for decades.
And it’s a worry echoed by U.S. polio experts, who say that countries around the world — including America — must be vigilant for signs of spread.
“The big issue is to assure that we have good surveillance to pick up polio as quickly as possible,” said. Dr. Walt Orenstein of Emory University, who has been working on eradicating polio for years. “As long as it circulates anywhere, it’s a risk everywhere.”
Because polio causes symptoms — including paralysis — in only about 1 of every 200 people infected, it has the potential to spread widely to others unnoticed, Dr. Martin Eichner of the University of Tubingen and Dr. Stefan Brockmann of the Reutlingen Regional Public Health Office in Germany wrote Thursday in a letter to the journal The Lancet.
“It might take … nearly 1 year of silent transmission before one acute flaccid paralysis case is identified and an outbreak is detected, although hundreds of individuals would carry the infection,” the experts wrote.
The situation will be exacerbated because most European countries, like the U.S., use inactivated polio vaccine, or IPV, rather than oral polio vaccine, or OPV, because the live-virus oral variety caused rare cases of paralysis in people who were vaccinated. While the IPV reduces transmission and protects well against paralysis, it only partially protects against infection, the experts warned.
In places with low vaccination coverage — including Bosnia, Herzegovina, Ukraine and Austria — there might not be enough widespread protection, known as “herd immunity," to prevent sustained transmission, they said.
“Vaccinating only Syrian refugees — as has been recommended by the European Center for Disease Prevention and Control — must be judged as insufficient,” they wrote.
Only a handful of European member states allow use of OPV and none has a stockpile of the live vaccine, the authors note. The U.S. has used only IPV since 2000, after eradicating polio in America in 1979.
Polio is caused by a virus that spreads between people, but it can survive in water and sewage, too. The series of vaccines can protect people for life, but babies too young to have been vaccinated and children who don’t get the full dose can be infected.
The outbreak in Syria has paralyzed at least 10 children in the country’s Del al-Zour province. They’re all younger than 2 and may have gone unvaccinated because of the ongoing conflict that has now left half the population — an estimated 9 million people — homeless and starving.
It’s unclear how polio got back into Syria, which had eradicated the virus in 1999, though officials say this bout may have originated in Pakistan. Polio immunization rates fell from 91 percent in Syria in 2010 to 68 percent in 2012, largely because of the impact of conflict, the World Health Organization says.


Video: International health care workers are providing thousands of vaccinations to prevent polio from spreading any further among Syrians, many of whom are living in squalid refugee camps. And polio isn’t the only threat -- poor sanitation in the camps provides ripe conditions for the spread of other diseases. NBC’s Dr. Nancy Snyderman reports.
Vaccination efforts are focusing on more than 2 million children in Syria, as well as in seven neighboring countries: Iraq, Turkey, Lebanon, Jordan, Israel, the Palestinian territories and Egypt.
“Without a doubt, it can go wider, go beyond Syria’s borders,” said Sarah Crowe, spokeswoman for UNICEF. “Disease knows no borders.”
Hundreds of thousands of refugees have fled the country to seek help in neighboring regions – and Europe. The German disease experts are calling for increased surveillance of sewage in settlements.
“I would agree with them, it is important to develop more use of environmental surveillance,” said Orenstein, the U.S. expert who spearheaded a global declaration by more than 400 scientists that an end to polio is possible.
In the U.S., imported cases of measles have sparked recent outbreaks of the disease, particularly in pockets of un-vaccinated children, raising the very real possibility that other infections could spread as well.
"Measles is your canary in the coal mine," Orenstein said. "It's much more contagious than polio. With polio, we have been fortunate, so far."
JoNel Aleccia is a senior health reporter with NBC News. Reach her on Twitter at @JoNel_Aleccia orsend her an email.
Post Polio Litaff, Association A.C _APPLAC Mexico
Publicadas por APPLAC
Email ThisBlogThis!Share to TwitterShare to FacebookShare to Pinterest
Polio, postpolio, vacunas, erradicación, Dr. Walt Orenstein of Emory University, experts in Germany, or IPV, Palestinian territories and Egypt., polio vaccine, Syrian Polio Outbreak
Newer Posts Older Posts Home
Subscribe to: Posts (Atom)