Bannu (Pakistan) (AFP) - Pakistani health officials are rushing to vaccinate hundreds of thousands of children against polio amid fears that a civilian exodus from a tribal area where the virus is rampant could spread the disease around the country.
Nearly half a million people have fled a military operation against Taliban strongholds in North Waziristan, a hotspot for the crippling disease in Pakistan.
Children in the tribal district have not been vaccinated since Taliban and local warlords banned health teams from giving out drops in June 2012.
Tens of thousands of families have fled to the town of Bannu, close to North Waziristan, while hundreds more have moved further afield to Lakki Marwat, Karak and Dera Ismail Khan towns, since the offensive began in mid-June.
Officials have begun a vaccination campaign in Bannu and three other districts adjacent to North Waziristan, vaccinating both resident families and newcomers fleeing the offensive.
"We are vaccinating both local and displaced children, the target is to vaccinate more than 200,000 children," doctor Akbar Jan, a senior health official in Bannu, told AFP.
The campaign in areas adjoining North Waziristan began -- unannounced -- on Monday. 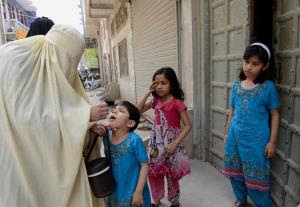 A health worker administers polio vaccine to a child during a vaccination campaign in Bannu, Pakista …
"Displaced persons were a threat to the host communities, now we have the opportunity to vaccinate both host community and displaced families," Jan said.
More than 50 cases of polio have been detected so far this year in militant-infested North Waziristan, out of 82 cases across the country -- and 103 worldwide.
A World Health Organization (WHO) official in Bannu told AFP the campaign would continue one day a week during the fasting month of Ramadan, which begins at the weekend.
- Vaccine rumours spurned -
Pakistan is one of only three countries, along with Afghanistan and Nigeria, where polio remains endemic, and efforts to eradicate it have been badly hit by rumours about the vaccine.
Various outlandish claims have circulated about the drops -- that they contain pork, or cause infertility or AIDS. 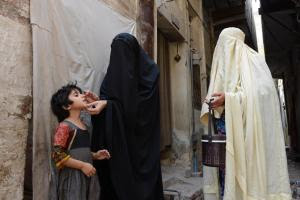 A health worker administers polio vaccine to a child during a vaccination campaign in Bannu, Pakista …
But health workers giving out the vaccine in a narrow street in Bannu's Tanchi bazaar area said they had encountered little resistance.
"This is a house-to-house campaign, our team has vaccinated 300 children in two days," Shumaila Khan told AFP.
"So far no family has refused to vaccinate their kids. There were many who were reluctant at first but later convinced."
Many parents had heard the rumours about the vaccine, Khan said.
"They said the Taliban told them it was an American conspiracy to disable their children, to make them infertile and to decrease the Muslim population," she said.
Sharif Zaman, a 35-year-old teacher sheltering in a school with 10 other families after fleeing North Waziristan, recalled the militants' propaganda.
"They used to tell us your children will suffer epilepsy and would become abnormal," the father-of-five told AFP.
Zaman had five kids who were all were vaccinated at a check post.
Naimatullah Khan, who was running a restaurant in Mir Ali, said militants used to distribute leaflets saying anti-polio drops were perilous.
"They used to threaten the whole population that any one whose child had polio drops would be slaughtered," he said.
"They used to say we will cut your throat with a dagger."
At the start of May, WHO declared a global "public health emergency" after new polio cases began surfacing and spreading across borders from countries including Pakistan.
Pakistan imposed new travel guidelines after the WHO move, requiring all citizens and long-term residents to have a polio vaccination certificate to travel abroad.
Post Polio Litaff, Association A.C _APPLAC Mexico

U.S. travelers heading for long-term visits to 10 countries with active polio transmission should get booster shots to prevent further spread of the potentially paralyzing disease, health officials cautioned this week.
Anyone going for more than four weeks to Pakistan, Cameroon or Syria — places that have spread wild polio virus to other countries — should ensure that they get an additional dose of vaccine a month before international travel.

Those going to seven other countries with active disease within their borders — Afghanistan, Guinea, Ethiopia, Iraq, Israel, Somalia and Nigeria — are highly encouraged to get an extra shot, according to a health advisory issued this week by the Centers for Disease Control and Prevention.
“We normally recommend that travelers to any country that’s polio endemic be up to date on their vaccinations, including receiving at least one dose of polio vaccine after age 18,” said Dr. Stephen Cochi, a senior advisor with the CDC’s global immunization program. “This ups the ante further.”
Even those traveling for less than four weeks ought to check their vaccination status and bring papers to prove it, Cochi recommended. Documentation will ease travel in those countries. Pakistan has already started checking records, he said.
The new guidance comes in the wake of the World Health Organization declaring last month that the spread of polio is an international health emergency that requires “extraordinary measures” to bring under control. There were 417 cases in 2013 of the disease that was once nearly eradicated, the WHO said.
It’s aimed at long-term travelers — think students, researchers and those with families abroad — who may be heading to polio-endemic places long enough to catch the virus and carry it silently home, Cochi said. That can happen even when people are up to date on their immunizations.
“With polio, the individual can be protected by having responded with antibodies in their blood,” he said. “But the immunity conferred in the intestinal tract wears off over time.”
That means within one to two years of last vaccination — and even quicker with the inactivated polio vaccine used in the U.S. — people can become infected with polio abroad and pass it to unvaccinated people when they return. Polio is a virus that only infects humans and symptoms are obvious only in about 1 in every 200 who have it.
“It’s very much similar to what we continue to experience with the measles virus brought back to the U.S. and then exploding after it enters a susceptible population,” Cochi said. Measles cases in the U.S. are at a 20-year high, fueled almost entirely by unvaccinated travelers.
The eradication of polio is still well within reach, but certain steps are necessary to make sure that continues, he added.
“We’re trying now to focus on those last few countries that might be spreading the virus and imposing restrictions,” he said.
Post Polio Litaff, Association A.C _APPLAC Mexico
Publicadas por APPLAC
Email ThisBlogThis!Share to TwitterShare to FacebookShare to Pinterest
Polio, postpolio, vacunas, erradicación, active polio transmission, Cameroon or Syria, Pakistan, paralyzing disease, Travelers
Newer Posts Older Posts Home
Subscribe to: Posts (Atom)