Crowds turn up for Polio vaccinations in Nigeria’s north-east

In Nigeria’s Borno and Yobe states, a major polio vaccination campaign is being carried out by state governments and partners, including UNICEF. Residents are also being provided basic health care services, including treatment for malnutrition.
ABUJA, Nigeria, 26 June 2014 – Young women hold their little ones as they sit patiently on wooden benches, waiting their turn at a health camp that provides polio vaccination and much-needed health care in north-eastern Nigeria, where increasing violence has led to displacement of local populations.
Many of the patients at the clinic in Bolori, a ward in Borno’s state capital of Maiduguri, have fled the violence, and quite a few of them show signs of malnutrition.
The health camps have been set up with UNICEF support as part of a major polio immunization campaign in Borno and Yobe, which have been worst-affected by violence.
Covering basic needs
Across the two states, health workers set up makeshift stands – sometimes just a few mats set out in the shade of a tree – to provide vaccinations to children, as well as basic health care services, including treatment for malnutrition.
Many of the children leave with smiles on their faces as they clutch the sweets they are given. Grown-ups receive soap, sugar and instant noodles, and medicines for those who need them.
In assisting Nigeria’s National Primary Health Care Development Agency (NPHCDA) and local authorities to run the campaign, UNICEF has sent more than 1,000 basic health care kits for use at the health camps, enough to cover the basic health needs of more than 400,000 people.
One woman said the health camps are the only place mothers like her can get drugs to treat malaria, skin infections and diarrhea. “God bless UNICEF,” she said with a smile.
Well and strong
The vaccination drive, which runs for six days, is part of a wider campaign targeting all under-5 children in 14 northern states.
Volunteers have been going door-to-door to let residents know they can get their children vaccinated and receive free treatment and medicine at the health camps.
One mother said she took her children to be immunized “because I heard that they will be protected against disease”. The woman, who declined to give her name, added, “I want my children to be well and strong.”
Major progress
Nigeria, one of three countries – with Afghanistan and Pakistan – where polio remains endemic, has made major progress in battling the disease. The number of confirmed cases has dropped from 122 in 2012 to 53 in 2013, and three so far this year.
But continued violence and instability in the region pose a major threat to the government’s goal of stopping transmission in Nigeria this year. Nearly 50 per cent of the polio cases in 2013 were from Borno and Yobe, where some areas could not be reached because of insecurity.
During a polio vaccination campaign in May this year, more than 295,000 children, or 18 per cent of the under-5 population, could not be immunized in Borno because they live in inaccessible areas. In Yobe, access improved significantly, and only 9,343 children, or 1 per cent, were not reachable.
Insecurity in the region has escalated since 2013 . Numerous health facilities have been destroyed and health workers have been killed, forcing some local doctors to flee.  As a result, access to health care has become even more difficult.
But wherever possible, immunization campaigns are held regularly, with strong involvement from the community, including polio survivors and religious and traditional leaders.
UNICEF continues to collaborate closely with the World Health Organization (WHO), Rotary International and other partners in the final push to achieve the global eradication of polio.

Paris (AFP) - A jab to protect children against polio that fell out of favor in the 1960s should be given a frontline role to help stamp out the disease, doctors reported in The Lancet on Friday.

The injection can provide better and long-lasting protection against the polio virus when used to supplement oral vaccine, which replaced it in most countries, they said.
Oral polio vaccine (OPV) protects individuals against contracting the disease, but they can still be infected by the virus.
It replicates in the gut and can then be passed to others through faecal-contaminated water, thus imperilling unvaccinated children.
Scientists at Imperial College London and the Christian Medical College in Vellore, in southern India's Tamil Nadu state, investigated whether the old-fashioned vaccine still had a part to play.
Their study involved 450 children from a poor urban area of Vellore, all of whom had received the oral vaccine as part of a standard innoculation programme.
Half of the children were then given a dose of the injected vaccine, which contains an inactivated virus, and the other half given nothing.
A month later, the children were given a dose of live oral vaccine, whose formula includes a tiny amount of live polio virus, the goal being to safely simulate re-infection.
A week later, their stools were tested to see if the polio virus was present -- specifically the two strains of the virus, serotypes 1 and 3, which are resisting eradication.
View gallery 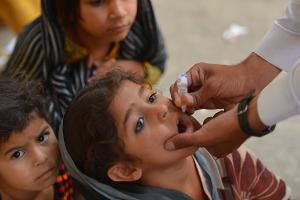 A Pakistani health worker administers the polio vaccine to a child during a vaccination campaign in  …
Among children who had received the injected vaccine, there were 38 percent fewer who had traces of serotype 1, and 70 percent fewer with serotype 3, compared to those who did not get the jab.
"Because IPV (injected polio vaccine) is injected into the arm, rather than taken orally, it's been assumed it doesn't provide much protection in the gut and so would be less effective at preventing faecal transmission than OPV," said Jacob John of the Christian Medical College.
"However, we found that where the children already had a level of immunity due to OPV, the injected vaccine actually boosted their gut immunity," he said in a press release.
He added: "In the 1960s there was extensive rivalry between the scientists who developed the two vaccines, with OPV eventually becoming the most popular.
"But it looks as if the strongest immunity can be achieved through a combination of the two."
- Tried and trusted -
Also called the inactivated polio vaccine or the "Salk vaccine," after its inventor, Jonas Salk, who developed it in 1955, the jab has long been considered an astonishingly safe and effective weapon against polio.
It is still used in dozens of countries, but in more than 120 others, oral vaccine is the exclusive choice, as it is cheaper, easier and quicker to administer.
The new findings add support to guidelines issued in February by the UN's World Health Organization (WHO).
The agency recommended that all children receive at least one dose of injected vaccine in countries that solely use OPV, in order to broaden the attack on all serotypes of the virus.
Polio, a crippling and potentially fatal disease that mainly affects children under the age of five, has taken a beating from a quarter-century vaccination effort.
In 1988, the disease was endemic in 125 countries, and 350,000 cases were recorded worldwide, according to the WHO.
Today, the virus is considered endemic in only three countries -- Afghanistan, Nigeria and Pakistan, where the vaccination campaign has been attacked by Islamists and tribal leaders.
The refugee crisis in Syria is considered another potential source of infection, as the vaccination programme there has been disrupted by war.
Health watchdogs are worried for unvaccinated children in those countries and in neighbouring countries where the vaccination guard may have slipped.
In May, the WHO declared that polio had returned as a "public health emergency" after three cases of cross-border transmission of polio were detected between January and April -- from Pakistan to Afghanistan, Syria to Iraq and Cameroon to Equatorial Guinea.
Post Polio Litaff, Association A.C _APPLAC Mexico
Publicadas por APPLAC
Email ThisBlogThis!Share to TwitterShare to FacebookShare to Pinterest
Polio, postpolio, vacunas, erradicación, esisting eradication, faecal-contaminated, Imperial College London, Post Polio Association Litaff, serotypes 1 and 3, vaccine fights Polio resurgence
Newer Posts Older Posts Home
Subscribe to: Posts (Atom)