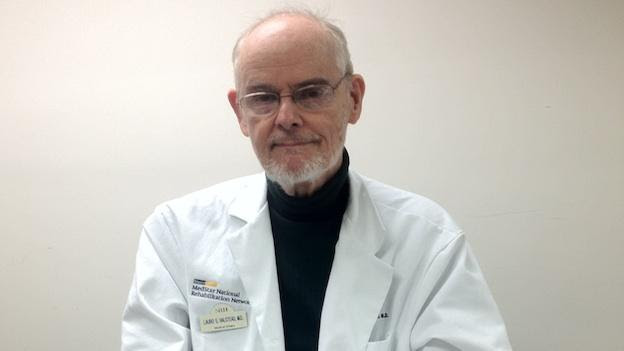 By: Sabri Ben-Achour November 2, 2012 Ben-Achour
Dr. Lauro Halstead retired in June after a 50-year career in medicine. He served at the Medstar Health National Rehabilitation Hospital for 26 years, where he specialized in spinal cord injury and post polio syndrome. He will be opening a small private practice focusing on helping older adults cope with physical disablities, he can be reached atlauroshalstead@gmail.com.
We have no control over some of the most important events that shape our lives, but we do have a choice in how we respond to them. Dr. Lauro Halstead contracted polio in 1954, and survived on a plywood ventilator in the basement of a children's hospital run by nuns. He went on to become a renowned physician, and treated polio patients and people with spinal cord injuries. He just retired from his position with the MedStar National Rehabilitation Hospital. He talks to Metro Connection's Sabri Ben-Achour about his work and about how a combination of serendipity and resilience dictate how our lives unfold. Following are highlights of their conversation.
Dr. Halstead on contracting polio as a teenager: "I was 18. I had just completed my first year of college. I was going to Europe as many students did in those days, and still do, and I passed through Madrid. And as it happens when I got to Madrid, I was quite ill initially — GI upset, mostly lower intestinal tract with diarrhea and cramps, low grade fever, not feeling generally well. Of course initially thought this was a minor setback and I'll be finished with this shortly. But this persisted and within about 48 hours my right arm was totally paralyzed. My legs were so weak I could not climb a set of stairs, and I had reduced use of my left arm. Eventually I ended up in a Spanish hospital, and within another week my breathing started to go out, and they transferred me to another facility where I was placed in a respirator."
On handling the disease while he was in Spain: "I was essentially alone. And what made it worse was in those days, the dictator of Spain, Franco, in an effort to conserve electricity, turned off all power in the city of Madrid from 2 a.m. to 6 a.m. And so the respirator went dead at 2 a.m. And just by the grace of God, I managed to survive and eventually get back to the United States."
On his decision to study medicine: "Well you're right in some respects. I didn't fully recover. My right arm has remained totally paralyzed since. My legs did get stronger; in fact, they were very strong for a number of years. And my left arm was reasonably strong — wasn't normal strength. I realized that with my physical limitation, I needed a profession where there was a fair amount of intellectual involvement."
On handling medical school: "Well, I was right-handed originally, so I did have to learn to write with my left hand. It was not very graceful script, but you manage, and that's one of the messages I learned with my polio, is that you learn to compensate in ways that the average person can't even conceive of. When I was in training, for example, I had to draw blood often, and one might say that is almost impossible with one hand. Well, I devised techniques for doing and in fact got so skillful that I was I was teaching other people how to do it with one hand, if you can believe it."
His advice to young people: "I think an important element for any young person is the whole concept of resilience and perseverance. I mean, no one's life is free of problems, of challenges, of confrontations. And I think it’s absolutely critical that everybody learn how to deal with misfortune, with events that are out of their control, with challenges,
whether it's physical, emotional, financial." http://wamu.org/programs/

PESHAWAR: The provincial health department has administered Inactivated Polio Vaccine (IPV) to children in Peshawar and Bannu districts for the first time to scale up their immunity and do away with the crippling disease.
The department has provided IPV to 280,000 children, including 224,000 in Peshawar and 56,000 in Bannu, on the recommendation of the Technical Advisory Group (TAG) as part of polio eradication strategy.
The activity is seen as a milestone by the health department, which is facing an uphill task to eradicate the disease.
The donor agencies want administration of IPV in other districts of the province to ensure that the disease is completely wiped out and children stay safe in future.
As opposed to the oral polio vaccine (OPV), the IPV is administered intramuscularly to the children but it has both long and short term benefits.
The provincial government had planned the activity in October last year but it was delayed owing to some administrative problems. It was finally completed on March 30.
The administration of IPV has been recommended by TAG, the highest forum, which is responsible for suggesting measures for global polio eradication, to strengthen immunity level of the children.
A single shot of IPV is given to the children between four to 23 months, provided they had already received at least two doses of OPV.
It has shown positive results in the worldwide polio eradication campaign.
The OPV is given to the children from birth to 60 months but cases have been reported that children were tested positive despite having had the oral polio vaccination.
The addition of IPV along with OPV aims to put brakes on the emergence of polio cases.
The World Health Organisation also wants administration of IPV to children after OPV as part of polio end-game strategy by June 2016.
The provincial health department has also achieved more than 95 per cent coverage of IPV in Peshawar and Bannu districts, which have been hosting unvaccinated children from Khyber and Waziristan agencies.
In 2014, Fata and Khyber Pakhtunkhwa together recorded 247 polio cases of the total countrywide 306 cases whereas as both have recorded 14 cases of the 21 cases in 2015.
In the past, there had been scientific evidence that virus from Fata had infected children in Khyber Pakhtunkhwa.
The world health agency says that both Fata and KP are responsible for hampering worldwide polio eradication efforts. It has been urging the country to take appropriate measures to safeguard not only its own population but also ensures that virus from this part of the country is not transported to the countries long declared polio-free.
WHO recommends that giving IPV to the children, who have already received OPV, brings positive results as far as protection from polio virus is concerned. It says that OPV will continue to be administered to the children because it is the only medicine to eradicate the poliomyelitis once for all. The IPV works when given to children after OPV.
In January, the government also administered IPV to children in FR Bannu where most of the children had remained unvaccinated owing to which they continued to infect children in Khyber Pakhtunkhwa.
Published in Dawn, April 6th, 2015
Visit our Webpage Post Polio Litaff, Association A.C _APPLAC Mexico
Publicadas por APPLAC
Email ThisBlogThis!Share to TwitterShare to FacebookShare to Pinterest
Polio, postpolio, vacunas, erradicación, giving IPV, Inactivated Polio Vaccine IPV, The World Health Organization

This article can be found in the following collections:

Postpolio syndrome is characterised by the exacerbation of existing or new health problems, most often muscle weakness and fatigability, general fatigue, and pain, after a period of stability subsequent to acute polio infection. Diagnosis is based on the presence of a lower motor neuron disorder that is supported by neurophysiological findings, with exclusion of other disorders as causes of the new symptoms. The muscle-related effects of postpolio syndrome are possibly associated with an ongoing process of denervation and reinnervation, reaching a point at which denervation is no longer compensated for by reinnervation. The cause of this denervation is unknown, but an inflammatory process is possible. Rehabilitation in patients with postpolio syndrome should take a multiprofessional and multidisciplinary approach, with an emphasis on physiotherapy, including enhanced or individually modified physical activity, and muscle training. Patients with postpolio syndrome should be advised to avoid both inactivity and overuse of weak muscles. Evaluation of the need for orthoses and assistive devices is often required.
Post Polio Litaff, Association A.C _APPLAC Mexico
Publicadas por APPLAC
Email ThisBlogThis!Share to TwitterShare to FacebookShare to Pinterest
Polio, postpolio, vacunas, erradicación, Neurological infections; Infectious diseases-other; Neurology-other; Neuromuscular disorders
Newer Posts Older Posts Home
Subscribe to: Posts (Atom)