Neuroprosthetics for paralysis: an new implant on the spinal cord

08.01.15 - New therapies are on the horizon for individuals paralyzed following spinal cord injury. The e-Dura implant developed by EPFL scientists can be applied directly to the spinal cord without causing damage and inflammation. The device is described in an article appearing online January 8, 2015, in Science.

EPFL scientists have managed to get rats walking on their own again using a combination of electrical and chemical stimulation. But applying this method to humans would require multifunctional implants that could be installed for long periods of time on the spinal cord without causing any tissue damage. This is precisely what the teams of professors Stéphanie Lacour and Grégoire Courtine have developed. Their e-Dura implant is designed specifically for implantation on the surface of the brain or spinal cord. The small device closely imitates the mechanical properties of living tissue, and can simultaneously deliver electric impulses and pharmacological substances. The risks of rejection and/or damage to the spinal cord have been drastically reduced. An article about the implant will appear in early January in Science Magazine.

So-called “surface implants” have reached a roadblock; they cannot be applied long term to the spinal cord or brain, beneath the nervous system’s protective envelope, otherwise known as the “dura mater,” because when nerve tissues move or stretch, they rub against these rigid devices. After a while, this repeated friction causes inflammation, scar tissue buildup, and rejection.

An easy-does-it implantFlexible and stretchy, the implant developed at EPFL is placed beneath the dura mater, directly onto the spinal cord. Its elasticity and its potential for deformation are almost identical to the living tissue surrounding it. This reduces friction and inflammation to a minimum. When implanted into rats, the e-Dura prototype caused neither damage nor rejection, even after two months. More rigid traditional implants would have caused significant nerve tissue damage during this period of time.

The researchers tested the device prototype by applying their rehabilitation protocol -- which combines electrical and chemical stimulation – to paralyzed rats. Not only did the implant prove its biocompatibility, but it also did its job perfectly, allowing the rats to regain the ability to walk on their own again after a few weeks of training.

“Our e-Dura implant can remain for a long period of time on the spinal cord or the cortex, precisely because it has the same mechanical properties as the dura mater itself. This opens up new therapeutic possibilities for patients suffering from neurological trauma or disorders, particularly individuals who have become paralyzed following spinal cord injury,” explains Lacour, co-author of the paper, and holder of EPFL’s Bertarelli Chair in Neuroprosthetic Technology. 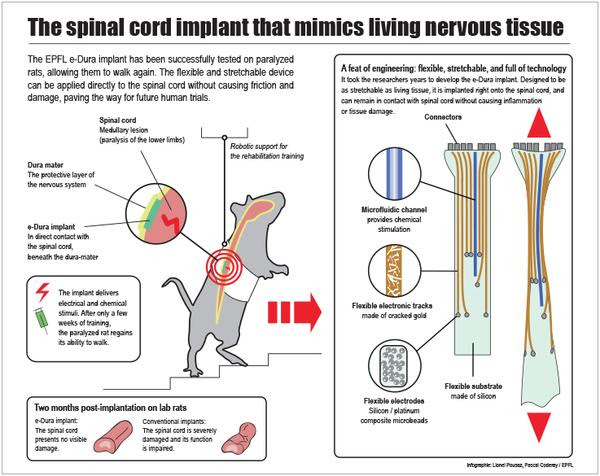 Flexibility of tissue, efficiency of electronicsDeveloping the e-Dura implant was quite a feat of engineering. As flexible and stretchable as living tissue, it nonetheless includes electronic elements that stimulate the spinal cord at the point of injury. The silicon substrate is covered with cracked gold electric conducting tracks that can be pulled and stretched. The electrodes are made of an innovative composite of silicon and platinum microbeads. They can be deformed in any direction, while still ensuring optimal electrical conductivity. Finally, a fluidic microchannel enables the delivery of pharmacological substances – neurotransmitters in this case – that will reanimate the nerve cells beneath the injured tissue.

The implant can also be used to monitor electrical impulses from the brain in real time. When they did this, the scientists were able to extract with precision the animal’s motor intention before it was translated into movement.

“It’s the first neuronal surface implant designed from the start for long-term application. In order to build it, we had to combine expertise from a considerable number of areas,” explains Courtine, co-author and holder of EPFL’s IRP Chair in Spinal Cord Repair. “These include materials science, electronics, neuroscience, medicine, and algorithm programming. I don’t think there are many places in the world where one finds the level of interdisciplinary cooperation that exists in our Center for Neuroprosthetics.”

For the time being, the e-Dura implant has been primarily tested in cases of spinal cord injury in paralyzed rats. But the potential for applying these surface implants is huge – for example in epilepsy, Parkinson’s disease and pain management. The scientists are planning to move towards clinical trials in humans, and to develop their prototype in preparation for commercialization.
FacebookTwitterLinkedInGoogle+Email
Post Polio Litaff, Association A.C _APPLAC Mexico
Publicadas por APPLAC
Email ThisBlogThis!Share to TwitterShare to FacebookShare to Pinterest
Polio, postpolio, vacunas, erradicación, implant, Science Magazine, Spinal Cord Injury

The parents refusing to vaccinate their children against polio

There have been more than 200 cases of polio in Pakistan since January - the first time infections have reached this level in nearly 15 years. Despite this, not everyone wants their children to be vaccinated.
Abrar Khan, who is 26, makes his way into a poor neighbourhood of Karachi called Baldia.
On his crutches, he carefully avoids potholes and dirty cesspools in the narrow alleyways lined, on both sides, with small houses.
He contracted polio when he was three. Now he's part of a team trying to change the minds of families who refuse to have their children vaccinated.
Many people here think the polio vaccination campaign is a western conspiracy to sterilise their children - it's an idea the Taliban have been putting about for 10 years now.
Listen to From Our Own Correspondent for insight and analysis from BBC journalists, correspondents and writers from around the world
Broadcast on Radio 4 on Saturdays at 11:30 BST and BBC World Service
Listen to the programme
Download the programme
In 2012 the militants ordered a complete ban on vaccinations in the tribal areas in western Pakistan as a response to US drone attacks.
Since then there's been no immunisation in that area.
As a result, says the children's charity Unicef, nearly 300,000 children have missed out on vaccination in that area in the last two years.
Most of the residents of Baldia came originally from Pakistan's tribal areas and most are reluctant to immunise their children.
Yet this is considered a high risk area for polio and I can see why. There's no sanitation to speak of.
As I walk through the narrow streets, I pass an open sewer running through a residential area.
Even before you see this canal full of sewage and rotten rubbish, you can smell it.
It's just the sort of environment in which polio thrives yet around us are about a dozen children, who all look under the age of five, playing in these squalid conditions.
Khan and the other health workers are being escorted by armed policemen. Without their protection the polio team can't do their job.
Many health workers and security personnel have been killed during immunisation campaigns across the country - I'm told there was a shooting in this neighbourhood not long ago.
We stop at one of the houses and an elderly woman answers the door. Four curious little children pop out next to her.
"None of the neighbours' kids has had it," she says of the vaccine. "Why are you after my grandchildren? I don't want this, I don't trust it," she adds angrily as she waves us away.
Khan moves on to the next house. A man stands in front of the entrance and starts shouting at him: "My children don't need this. Leave them alone! Why are you after them? And why just polio? There are other diseases why are you focusing on this one?" he yells.
Khan calmly replies: "We're trying to eliminate polio. We're trying to show that we can do this."
But the man shouts back: "Show who? America? I don't care about them."
People start to gather round us as he shouts: "I don't trust this team."
Khan tries again, this time he takes out a small brochure from a folder he has with him. It's a fatwa, a religious decree from a well-known cleric, which condones polio vaccination.
"What's this?" the father says, now more agitated than ever. "I can't read," he says, "why are you giving me this?"
Finally he tells Khan to leave, goes back into the house and slams the door.
As we walk away from the house, Khan explains: "I try to tell them in any way I can, but they aren't willing to listen. I say 'look at me, I'm a victim of polio. Your children could be like me,'" he says, pointing at his legs.
I can hear the frustration in his voice: "This man is doing his children a big injustice. He's taking them down a path of lifelong disability. He's the children's worst enemy."
This refusal to vaccinate is one of many reasons why Pakistan is failing to eradicate polio. But it's not just the influence of the Taliban - experts now point the finger at government mismanagement as well.

Source: World Health Organization
A recent report described Pakistan's polio programme as a disaster. Campaigns take a long time to organise and when they finally get under way, they're inefficient.
The polio workers themselves are overworked and underpaid and they risk their lives trying to do their job.
Some tell me they have to wait for days to get the proper security personnel to escort them.
And so there have been more than 200 cases this year - that's more than 200 families watching their loved ones suffer from something that could easily have been prevented.
At the end of a long day Khan invites me back to his family house. He got married recently and I meet his bride and about a half a dozen other women. his sisters and sisters-in-law.
Altogether there are seven families in the house and between them around 26 children.
"How many children do you want?" I ask him. "Three inshallah, God willing," he says, "and I will vaccinate them," he adds, with a hopeful smile.
How to listen to From Our Own Correspondent:
BBC Radio 4: Saturdays at 11:30
Listen online or download the podcast.
BBC World Service: Short editions Monday-Friday - see World Service programme schedule.
Subscribe to the BBC News Magazine's email newsletter to get articles sent to your inbox.