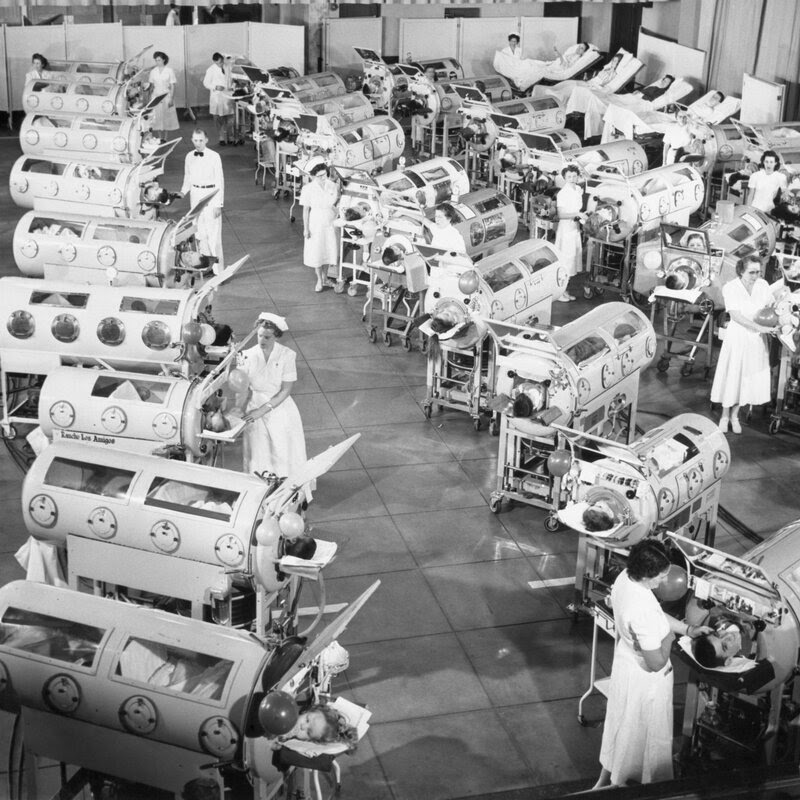 Iron lungs in a polio ward, undated.
Corbis
Tens of thousands of Americans — in the first half of the 20th century — were stricken by poliomyelitis. Polio, as it's known, is a disease that attacks the central nervous system and often leaves its victims partially or fully paralyzed.
The hallmarks of the Polio Era were children on crutches and in iron lungs, shuttered swimming pools, theaters warning moviegoers to not sit too close to one another.
On April 12, 2015, we celebrate the 60th anniversary of a vaccine developed by Jonas Salk that prevented the disease and eventually led to its remarkable decline. The introduction of that vaccine in 1955 was one of the biggest medical advances in American history. 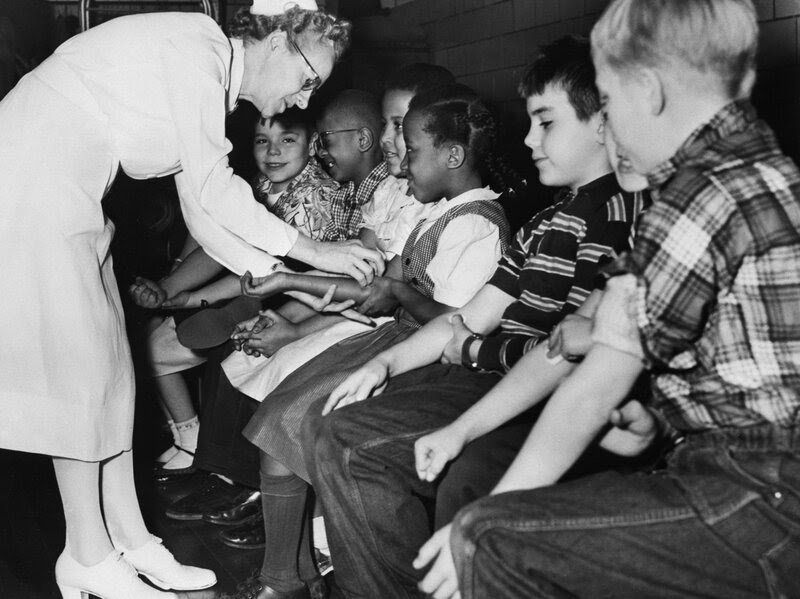 A nurse prepares children for a polio vaccine shot as part of citywide testing of the vaccine on elementary school students in Pittsburgh in 1954.
Bettmann/CORBIS
Think of it: Between 1937 and 1997, Post-Polio Health International estimates in one table, more than 457,000 people in the U.S. — and hundreds of thousands more around the world — suffered from some form of polio. Thousands and thousands were paralyzed in this country alone.
Within two years of the 1955 announcement, U.S. polio cases dropped 85 to 90 percent, Joe Palca of NPR reported.
But, as is often the case, the statistics — even dramatic statistics — don't tell the complete story. So let's listen to a couple of contemporary Americans who lived through the horror talk about the disease — and about its defeat.
David M. Oshinsky, 70, is a history professor at New York University and director of the Division of Medical Humanities at the NYU-Langone Medical Center. His book, Polio: An American Story, won the 2006 Pulitzer Prize for History. Walter A. Orenstein, 67, is a professor of medicine, pediatrics and global health at Emory University. He is also associate director of the Emory Vaccine Center.
1) When was the polio epidemic at its worst in the United States? "Polio was at its height in the early 1950s," says Oshinsky, "just as the Salk vaccine was tested and found to be 'safe, effective and potent.' "
2) How was the public responding — what precautions were people taking, what myths were being circulated? "The public was horribly and understandably frightened by polio," says Oshinsky, who grew up in Queens, N.Y. "There was no prevention and no cure. Everyone was at risk, especially children. There was nothing a parent could do to protect the family. I grew up in this era. Each summer, polio would come like The Plague. Beaches and pools would close — because of the fear that the poliovirus was waterborne. Children had to say away from crowds, so they often were banned from movie theaters, bowling alleys, and the like. My mother gave us all a 'polio test' each day: Could we touch our toes and put our chins to our chest? Every stomach ache or stiffness caused a panic. Was it polio? I remember the awful photos of children on crutches, in wheelchairs and iron lungs. And coming back to school in September to see the empty desks where the children hadn't returned." 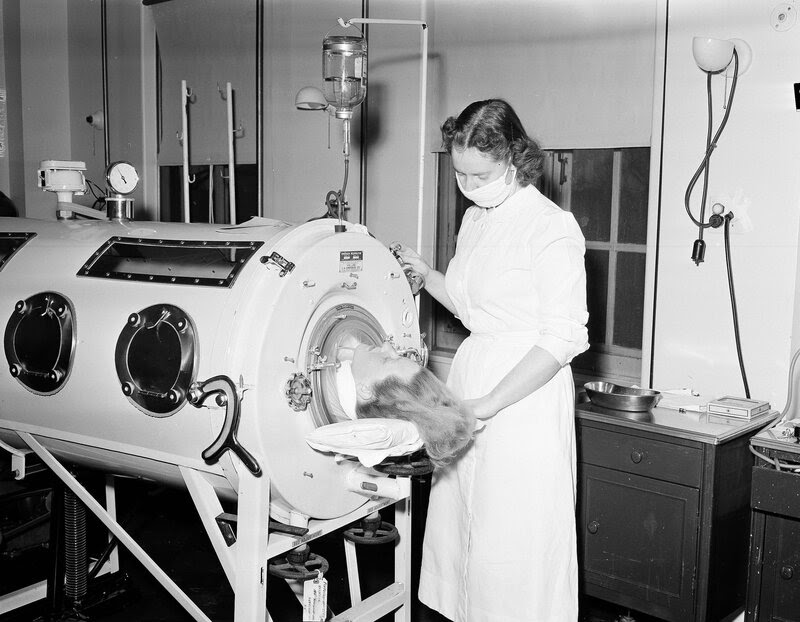 A nurse assists a 27-year-old patient in an iron lung in Syracuse, N.Y., in 1954.
AP
3) What cultural changes occurred in America as a result of the polio outbreaks and as a result of its cure? "Rumors spread that soft drinks were responsible — or too much rain or heat," Oshinsky says. "In some places people stopped handling paper money and refused to shake hands. But mostly people mobilized to fight the disease by raising money for the March of Dimes, which promised us a life-saving protective vaccine. And, in the end, it gave us two vaccines — the injected killed-virus version of Jonas Salk and the oral live-virus version of Albert Sabin."
4) How was the country different before — and after — the polio scares?"Word that the Salk vaccine was successful set off one of the greatest celebrations in modern American history," Oshinsky remembers. "The date was April 12, 1955 — the announcement came from Ann Arbor, Mich. Church bells tolled, factory whistles blew. People ran into the streets weeping. President Eisenhower invited Jonas Salk to the White House, where he choked up while thanking Salk for saving the world's children — an iconic moment, the height of America's faith in research and science. Vaccines became a natural part of pediatric care."
5) When and what was the process for Jonas Salk and his vaccine and when was his ah-ha moment? "Salk's 'Eureka Moment' came when he realized that his killed-virus vaccine produced high antibody levels in children, following a series of experiments in the early 1950s," Oshinsky says. "And his vaccine was validated in 1955, following the largest public health experiment in American history, involving close to 2 million schoolchildren, some getting the real vaccine, the others a look-alike placebo. It took a year to tabulate the results, which were extraordinary."
6) What did Albert Sabin contribute to eradication of the disease? "Sabin couldn't test his oral live-virus vaccine in the U.S. because so many kids were already vaccinated with the Salk vaccine," Oshinky explains. "So, in one of the great stories of the Cold War era, he was allowed to go to the Soviet Union and Eastern Europe to test there. They lined up close to 70 million children — the glories of repressive police states — and the results were fantastic. The Sabin vaccine was extremely effective, giving the world two terrific vaccines against polio."
7) What are the chances that polio will return to the U.S. or that something as serious will reach such critical epidemic levels? "The chances of a return of polio to the U.S. are slim although not zero," says Walter A. Orenstein. "The main reason is the Global Polio Eradication Initiative (GPEI). When it began in 1988, there were an estimated 350,000 persons paralyzed by polio in that year alone. In contrast, in 2014, there were only 359 cases, a greater than 99 percent reduction. In 1988, there were 125 countries considered endemic for polio. In other words, these countries had continuous circulation of polioviruses. In 2014, only three countries are considered endemic: Pakistan, Afghanistan and Nigeria. What would put the U.S. at greatest risk is failure to complete eradication and, even worse, a backing-off of the efforts to contain the virus, in which case there would likely be a global resurgence. Working in partnership with the GPEI is the best way to eliminate the risk for a return of polio to the U.S." 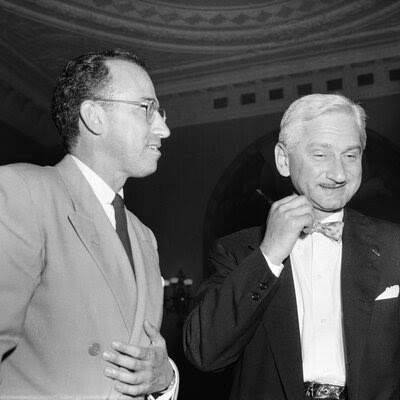 i
Dr. Albert B. Sabin (right) and Dr. Jonas Salk in Washington in 1955.
Henry Griffin/AP
8) How can we prevent it? "As long as polioviruses circulate anywhere," Orenstein says, "there is the potential that the virus can be exported to the U.S. The best way to reduce that risk is to ensure our population is fully immunized in accordance with recommendations of the Centers for Disease Control's Advisory Committee on Immunization Practices and in addition, travelers to areas where polio is endemic or epidemic should receive at least one additional dose of vaccine. Long-term residents of 'polio exporting countries' — that is, countries which have exported poliovirus in recent years — should receive a dose of polio vaccine at least four weeks prior to travel outside of the country and no more than 12 months prior to travel."
9) How did Jonas Salk — and other vaccine creators — deal with people who did not believe in the vaccine? "During the period when Jonas Salk developed the inactivated polio vaccine, or IPV, there was not much opposition to vaccines," says Orenstein, who grew up in the Bronx. "People were genuinely scared about polio and the annual epidemics — which during the early 1950s paralyzed more than 15,000 people each year in the U.S. IPV was viewed as a miracle. I remember being in second grade when the Salk polio vaccine was licensed and there was to be a vaccination campaign in my school. I was none too thrilled about getting 'a shot' for something I knew nothing about. I remember my mother saying to me 'Better you should cry, than I should cry.' That's how much appreciated the vaccine was."

These days, Orenstein says, "Vaccines are in a sense victims of their own success. Diseases which caused so much fear years ago cause little fear today because today's parents have never seen such cases. They are artifacts of history to them. But because all of the infections prevented by vaccines still circulate somewhere in the world, there is the potential of major resurgences should the pathogens be reintroduced into populations with low vaccination coverage."

He adds: "It is incumbent for all of us who know something about vaccines to better educate our population regarding the risks of vaccine-preventable diseases, the benefits of the vaccines which prevent them, the risks of the vaccines and how they compare with the benefits, and the system in place to assure the vaccines we use are safe and effective."(This post has been updated.)
Post Polio Litaff, Association A.C _APPLAC Mexico
Publicadas por APPLAC
Email ThisBlogThis!Share to TwitterShare to FacebookShare to Pinterest
Polio, postpolio, vacunas, erradicación, Defeating Polio, The Disease That Paralyzed America
Newer Posts Older Posts Home
Subscribe to: Posts (Atom)