Like most outpatient therapy programs, the Christopher & Dana Reeve Foundation NeuroRecovery Network® (NRN) focuses on setting and achieving milestones and goals.
Gaining Independence
For 20-year-old Mike Nichols, a major goal was the ability to put on his own shirt.
“When I first arrived at the NRN, I had limited arm movement and it took me 45 minutes to put on an oversized regular shirt. I would often fall forward or to the side,” said Nichols who sustained a C5 vertebrae injury in a 2014 high school ice hockey game. “Now I can sit unsupported for 10 minutes and get a right-sized shirt on in less than a minute.”
For five days a week for six months in 2015, Nichols participated in a total of 140 outpatient NRN sessions at the Kessler Institute for Rehabilitation in West Orange, NJ.
“I gained irreplaceable benefits from my time in the NRN. Before, 95 percent of the time if I fell forward in the chair, I would have to ask for help,” said Nichols who improved his arm strength, posture and blood pressure regulation. “I had big improvements in my trunk and my ability to activate my core. The NRN helped me develop a lot more independence. It makes my day better when I can do more things myself.”
Building Confidence
Sean Kennedy gained significant improvements to his upper body strength, blood pressure and sensory ability from NRN therapy at Kessler. He has also re-gained the ability to sweat and cool himself.
“I am so much stronger and more confident now thanks to the NRN,” said Kennedy, an Albany, NY, native who sustained a spinal cord injury in 2010 in a college swim practice diving accident. “It was hard work, painful and frustrating at times, but it felt great to get moving again. Everything in my body feels better.”
Now Kennedy stands and walks at home on a regular basis. He can dress himself and brush his teeth, things that he wasn’t able to do before his time at the NRN. He also works at a local TV station and recently bought an adapted car.
“I credit my time at the NRN for all the independence I have today,” said Kennedy. “I will always have a connection to the fun, nice and dedicated people who helped me.”
Reaching New Heights
Like Nichols and Kennedy, 57-year-old Mike Pellicano believes the NRN program is the best thing he ever did. The 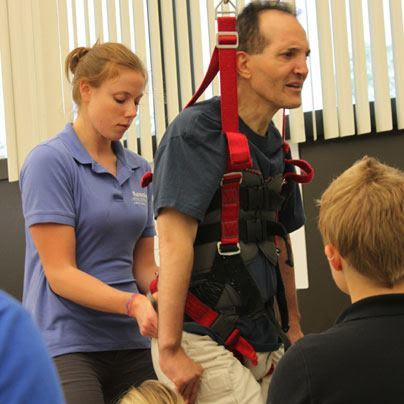 Olyphant, PA, native sustained a C4 injury in a 2002 ski accident. In 2010, Pellicano drove over 2 hours each way, five days a week for five months to participate in NRN therapy.
“I started the NRN program eight years after my injury,” said Pellicano. “When I arrived I couldn’t stand and I had only some voluntary movement in my legs. I could not sit without tipping over.”
Through Locomotor Training, Pellicano regained trunk stability and was able to sit independently. He is now able to stand with minimal assistance from a therapy mat. He also improved his cardiovascular, respiratory, bowel and bladder function.
“Everything works better now,” said Pellicano. "For the first time in the eight years since my injury, on our 33rd wedding anniversary, I was able to kiss my wife Susan while standing up. I can now stand for 10-25 minutes a day.”
Advocating for Others
Like many others, Kennedy had difficulty convincing his insurance company about the value of the NRN program. He had to continually file paperwork and fight to stay in the therapy.
“I don’t think insurance companies understand the benefits of the NRN because they don’t have anyone who has seen it,” said Kennedy. “Walking two steps doesn’t seem like a lot on paper, but to a person living with a spinal cord injury, it is very significant.”
Although Nichols insurance company was supportive of his NRN therapy, he agrees with Kennedy. He saw many in the program who weren’t as lucky.
“The insurance companies need to ease up on how quickly they want to pull people out of the NRN. They shouldn’t be able to tell people over the phone that they can’t do therapy,” said Nichols. “If insurance companies had to come to the NRN and tell people they can’t do therapy, I think many opinions would change.”
Pellicano has taken his advocacy even further. In 2015, he met with three Pennsylvania Congressmen and two Pennsylvania Senators in Washington, DC, at the Roll on Capitol Hill, an annual United Spinal Association legislative advocacy event. He hopes his efforts will improve Medicare coverage for patient access to complex rehabilitation technologies.
“I felt motivated and encouraged by my time in the NRN, and I made its benefits known to the representatives I met with in DC. I expressed the need for the NRN to be a covered benefit of Medicare and Medicaid. This would make it difficult for private insurances to deny coverage for the NRN, since they often cite Medicare when making claim decisions," said Pellicano.
Kennedy agrees, “The NRN program needs to be a more common practice. Anyone with a spinal cord injury can benefit from this life-changing experience.”