How is it Possible ….Can Depression Be Faked?

By Nancy Schimelpfening
Question:  My co-worker has been missing a lot of work and she says it’s because she has depression.  The other day I was at the mall on my lunch break and saw her out shopping with her sister and not really looking all that depressed.  This makes me upset because I’ve been working overtime trying to take up the slack while she’s out from work.  I do have a lot of sympathy for people who have mental illness, but I don’t want to get taken advantage of either.
I’m considering telling our boss what I saw.  Could it be that she is faking her depression?
Answer:  I completely understand why you might feel upset about what you saw.  Going by external appearances only, it’s very easy to think that your friend might be faking her illness.  However, what we really have is only a moment in time.  What matters most in determining whether she has depression too severe to attend work is what her life is like overall.  Perhaps she had great difficulty falling asleep the night before and wasn’t able to get out of bed until just before you saw her? Maybe she was only at the mall because her sister dragged her along hoping to help her feel better.  It’s really impossible for us to know just based on seeing her for a few moments whether she is indeed depressed.
What I can tell you is that depression tends to be an invisible illness.  Many of its symptoms are mental and emotional and its signs are not always obvious to the casual observer.
People with depression often look completely normal on the outside because they become very good at pulling themselves together while out in public, putting on a false smile to hide the turmoil that they feel inside.  Then, when they are all alone, they fall apart.
Even though depression can be difficult to detect, if you look really closely, you may be able to see some of its signs in your coworker.
Does she ever:
If she seems to exhibit several of these signs, then it is quite possible that she really is telling the truth about her condition.  Perhaps the best thing you can do, rather than telling your boss what you saw, is to reach out to your co-worker and offer your support.  If she really is faking her depression then this will soon become clear.  If, however, she is genuinely depressed, the chances are good that she really could use a friend.
SOURCE: verywell.com
Post Polio Litaff, Association A.C _APPLAC Mexico
Publicadas por APPLAC
Email ThisBlogThis!Share to TwitterShare to FacebookShare to Pinterest
Polio, postpolio, vacunas, erradicación, Depression Be Faked

If you haven't gotten your flu shot yet, get it now


With flu season right around the corner, U.S. health officials are urging everyone to get their flu shot now so they’ll be protected from the potentially serious complications of influenza.

“The fact that flu activity hasn’t picked up dramatically yet means there is plenty of time for people to get vaccinated if they haven’t already,” said Lynnette Brammer, an epidemiologist with the U.S. Centers for Disease Control and Prevention.
This year’s flu season is starting out much like last year, Brammer said. Currently, influenza H3N2 is the predominant strain, she said, although H1N1 is also circulating. Last year, the H3N2 virus started out as the dominant strain, only to be displaced by H1N1 as flu season hit full swing. “It ended up being an H1N1 season,” she said.
“It’s similar to a lot of years right now,” Brammer added. “Things should start to pick up in the next few weeks, but we’ll see. Last year, things didn’t really pick up until the first of the year. Right now, there is nothing that’s really concerning.”
Last year’s flu season was particularly hard on older people.
In a typical flu season, flu complications -- including pneumonia -- send more than 200,000 Americans to the hospital. Death rates linked to flu vary annually, but have gone as high as 49,000 in a year, according to the CDC.
Most of the time flu activity peaks between December and March but can last as late as May.
This year’s vaccine contains the strains currently circulating, which makes it a good match, Brammer said. The vaccine supply is also good this year, with more than 131 million doses available, she said.
How effective a vaccine is depends on how good a match it is to the strains of flu virus circulating that year. Most years, the vaccine is between 40 percent and 60 percent effective, according to the CDC.
The CDC recommends that anyone 6 months of age and older get a flu shot. “You want to make extra sure for people at high risk -- including pregnant women, the elderly and anyone with a chronic medical condition,” Brammer said.
Women with newborns also need to get their flu shot to help protect their infants, who can’t be vaccinated until they’re at least 6 months old. Also at risk are seniors and people with chronic health problems, such as lung and heart disease, the CDC said.
Getting your flu shot soon is important because it can take several weeks to produce enough antibodies to give you maximum protection, officials noted.
One change this year is that the CDC’s Advisory Committee on Immunization Practices does not recommend that the nasal spray vaccine be used by anyone, because it seems less effective than a shot, Brammer said.
© 2016 HealthDay. All rights reserved. This material may not be published, broadcast, rewritten, or redistributed.

'It feels wonderful, actually': The polio survivor who has lived inside an iron lung for 60 YEARS

Martha Ann Lillard's crippling illness has made her a prisoner in her own home for the last 60 years.
Paralyzed by polio at age five, the Oklahoma woman has spent most of her life encased in a 1940s respirator which breathes for her.
But the 65-year-old couldn’t imagine life any other way. 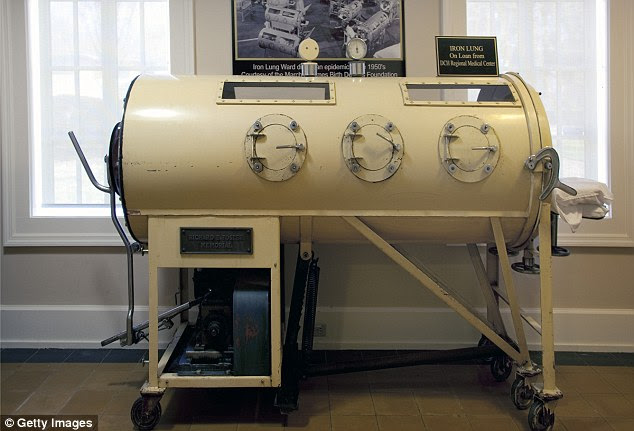 Martha Ann Lillard, 65, has lived inside an iron lung like this one since she was five-years-old
'Some people have said I’d rather die than leave my iron lung, and it makes it sound like I’m not trying to be modern, and it’s not like that at all,' she told NBC News.
'It feels wonderful, actually, if you’re not breathing well. When I was first put into it, it was such a relief. It makes all the difference when you’re not breathing.'
Lillard has learned to live with her disease.
She taught herself to walk again. While she can leave the 800-pound respirator, she prefers not to.
Lillard lies on a goose down comforter inside a long metal cylinder in which she’s enclosed with an airtight seal. Her neck and head sticks out of a foam collar.

There are switches inside to allow her to roll a tray-like cot in and out.
She lives with her three beagles, and a housemate who helps care for her. She stays in touch with friends by phone and internet.
Lillard owns her iron lung, which runs on a fan belt motor that friends help patch together with car parts when it breaks.
She said it's a better option than portable positive pressure ventilators which most polio survivors use. They force air into the lungs, often through a tube in the throat.
'If I use the positive pressure vent, I’m not as well rested,' she said.
Martha told MailOnline about her experience. 'I was paralyzed all over except my face.I was unconscious & turning blue when they put me in the lung. I was in it for six month in hospital, during which time I learned to breathe for 30 seconds and longer on my own. It was terrifying.W hen you can't breathe much, you can't talk, cry or make a sound. Doctors said I wouldn't ever be out of the lung or walk. I was determined to do both!'
She says that after the time she spent in hospital she regained 25% of her breathing and after a year of work she learned to walk.
'I would love to not need any vent & would like not to have the weakening that comes with Post-Poilo Syndrome. I can't use other types of ventilators because of inflammation that comes with Polio. I could be more rested if I stayed in the lung full time. But I choose to be up as much as possible.Get the vaccine!’ 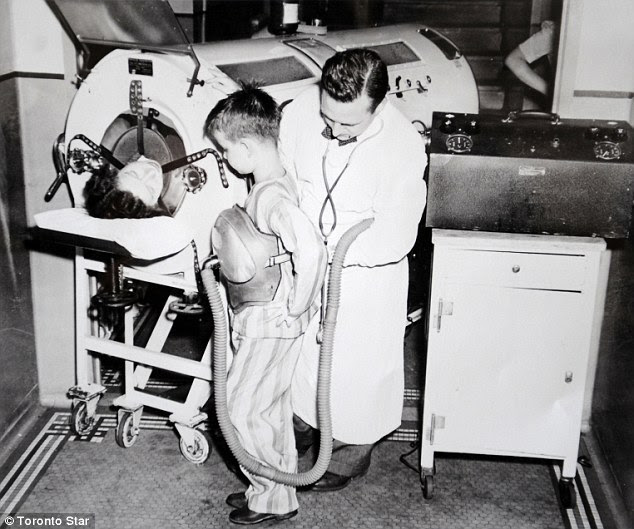 This undated photo shows a woman lying inside an iron lung
Lillard considers herself an anomaly in a U.S. society that barely remembers the scourge of polio - a viral infection of the spinal cord that mainly affected young children.
But with reports polio has reared its ugly head in Syria and Cameroon, Lillard wants to make sure that people never forget.
'I think the word is to get your child vaccinated. Why would we let somebody have to go back through that again?' she said.
'If my mother would have had the opportunity to give me the vaccine, she would have done that.'
Lillard was a kindergartner in 1953 when she woke up with a sore throat that quickly progressed to poliovirus. The virus is transmitted through contaminated food and water.
'The night before I was paralyzed, the neighbor children ate out of the same bowl of pancake batter that I did,' Lillard said. 'They just had to pray that nobody got it.'
The first known outbreak of polio in the U.S. was in 1894 in Vermont. In 1952, a record 57,628 cases of polio were reported in the U.S.
Read more: http://www.dailymail.co.uk/news/article-2516222/It-feels-wonderful-actually-The-polio-survivor-lived-inside-iron-lung-60-YEARS.html#ixzz4SkVnU7ZD
Follow us: @MailOnline on Twitter | DailyMail on Facebook