Paul Chamberlain, a 66-year-old chartered accountant, has motor neurone disease, a terminal illness that affects the nervous system. Here, he explains why he has decided to take his own life - and why he is campaigning in favour of the assisted dying bill, which would legalise assisted suicide for terminally ill people
Guy Grandjean and Sarah Boseley, theguardian.com
This article is over 4 years old


I first encountered Stephen Hawking on the cover of the New York Times magazine. Inside, its pages told a story we all know today, but at the time it was a revelation: a Cambridge astrophysicist sought to solve the great mysteries of the universe, while he himself was trapped in a wheelchair by a progressive neurogenerative disease. I remember being struck by writer Timothy Ferris’s description of Professor’s Hawking’s shoes, their soles pristine, having never touched the ground. I tucked the article in my knapsack, and a few days later I finished reading it on my way to lunch with a literary agent. 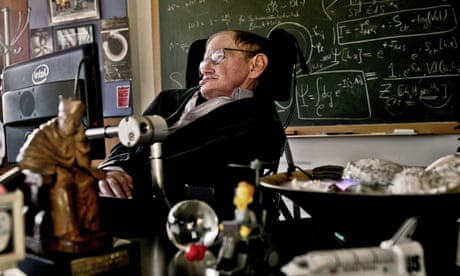 Read more
In one of those remarkable moments of serendipity, during lunch I mentioned the article to agent Al Zuckerman, who told me he was already trying to reach Professor Hawking to see if he might be interested in writing a popular book. Some months later I received a submission from Al — a short manuscript and an invitation to participate in an auction for the publishing rights to A Brief History of Time.
At the time I was a senior editor at Bantam Books, which was an unlikely home for Prof Hawking’s book, given the number of prestigious, traditional publishing houses in the hunt to acquire it. However, Bantam’s experience selling popular paperbacks meant that its distribution went far beyond bookstores into drugstores, supermarkets, and airport shops. I sent a letter to Professor Hawking along with our financial offer, making the case that Bantam could get his book in the hands of the widest possible readership. It turned out that he was the rare academic who wanted just that — to bring his esoteric scholarly work to the attention of the masses. He chose us.
A few months later Stephen Hawking came to the US from Cambridge to give a lecture at Chicago’s Fermi Institute, so I arranged to meet him afterwards at the Holiday Inn, where Stephen was staying. As I turned into the parking lot, another car pulled up nearby. A young man got out, opened the trunk, unfolded a wheelchair, and placed a large battery underneath it. Then he opened the passenger door and gently scooped up a thin figure, and arranged him in the wheelchair. As I got out of my car he shouted, “Is that Peter Guzzardi? This is Professor Hawking,” just as the wheelchair spun a full 360 degrees and rocketed in the direction of the hotel lobby, with Stephen’s assistant and me in full pursuit.

Sign up for Bookmarks: discover new books our weekly email

Read more
When we convened in Prof Hawking’s room, I introduced myself, and asked politely if his flight from London had been comfortable. Stephen responded with a brief series of undecipherable sounds, which his assistant, a physics graduate student named Brian Whitt, translated. “Prof Hawking wants to know if you brought the contract.” So much for small talk. I produced the legal document, and Brian held it up, page by page, for Stephen to read, which he did at breathtaking speed. His body might be largely beyond his control, but his mind was obviously in hyper-drive.
Since Stephen didn’t yet have a publisher in the UK, the job of editing the English language edition of A Brief History of Time fell to me. I won’t pretend that it wasn’t a challenge. The manuscript was a slender but extremely dense 100 pages, describing the quest for the holy grail of science – one theory that could unite two separate fields that worked individually but wholly independent of each other. Particle physics explained the ghostly forces at work within atoms, whereas astrophysics made sense of massive effects like gravity that operated at the level of galaxies and star systems. As Stephen would so poetically put it, if scientists could come up a grand unified theory that explained both these fields we would truly understand everything: we would finally “know the mind of God.”
Advertisement
At the time, however, our goal was far more modest. We were just trying to create a book that was scientifically accurate without being impenetrable to the general reader, someone like me. My primary contribution to the book was to doggedly keep asking Stephen questions, not giving up until I understood what he intended to convey. That process took many months of correspondence, interrupted by a medical crisis that led to the tracheotomy that saved Stephen’s life, but left him unable to speak at all. Thanks to his fierce determination and some remarkable computer software, Stephen was able to continue working on the book, and he eventually completed the final draft in the fall of 1987.
The rest, as they say, is history. A Brief History of Time sold out its first US printing in a matter of days, became a #1 bestseller around the world, was translated into more than 35 languages, and went on to sell more than 10 million copies. More importantly, it continues to make generations of readers aware of the ongoing quest to come up with the Grand Unified Theory of Everything. I’m honoured to have played a role in the publication of A Brief History of Time, and to have known, worked with, and befriended the brilliant, inspiring man who wrote it.

… we have a small favour to ask. More people are reading the Guardian than ever but advertising revenues across the media are falling fast. And unlike many news organisations, we haven’t put up a paywall – we want to keep our journalism as open as we can. So you can see why we need to ask for your help. The Guardian’s independent, investigative journalism takes a lot of time, money and hard work to produce. But we do it because we believe our perspective matters – because it might well be your perspective, too.

I appreciate there not being a paywall: it is more democratic for the media to be available for all and not a commodity to be purchased by a few. I’m happy to make a contribution so others with less means still have access to information.Thomasine, Sweden

Paralympics in the Spotlight

The opening ceremonies of the Pyeongchang Paralympics, photo courtesy of the Republic of Korea
For winter sports enthusiasts going through Olympic withdrawal syndrome, fear not — the Paralympic Games are just getting started.
The opening ceremonies of the 2018 Paralympics in Pyeongchang, South Korea, took place on March 9. The games run through March 18 and have made huge strides in media recognition. Case in point, if you log on to Google today, you see a cool animation showing a seated cross-country skier, sled hockey player, curler in a wheelchair, below-the-knee amputee snowboarder and one-armed snowboarder.  Even better, there is a write-up on the “Google doodle” in Time magazine.

The games are also gaining television coverage, specifically on NBC and NBC Sports Network, as well as the Olympic Channel and livestreaming on nbcolympics.com.  The full schedule of coverage can be seen here.
The winter Paralympics have also captured interest on tech and edgy sites like BuzzFeed, which features a catchy and easy-to-understand write up and animation of the six sports and explanation of disability classifications — paraplegic, amputee, vision-impaired, etc. — as well as a look at adaptations and techniques that the 650 participants use to compete.
And last but not least, unlike after past Olympics, where sponsors “rolled up the carpet and went home” before the start of the Paralympics, Toyota remains a strong partner — perhaps this means we might catch more glimpses of the new iBot in their commercial coverage.
Let the games begin!
Post Polio Litaff, Association A.C _APPLAC Mexico
Publicadas por APPLAC
Email ThisBlogThis!Share to TwitterShare to FacebookShare to Pinterest
Polio, postpolio, vacunas, erradicación, Paralympics, South Kore
Newer Posts Older Posts Home
Subscribe to: Posts (Atom)